I was able to make time on Friday afternoon to go for a good tramp around Epping and Coopersale’s frozen streets (and to drop off a final few Focus leaflets). 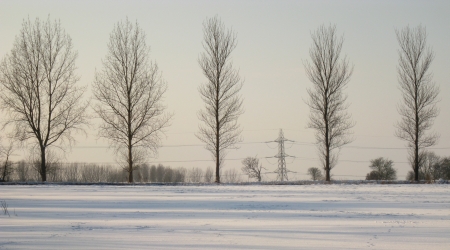 The effects of the snow are showing up in the form of at least one broken street sign and rapidly deteriorating road surfaces (it would have helped if those particular potholes had been repaired when they first appeared many weeks ago), which I have now reported.

I also did a circuit around Swaines Green and then later walked across the fields along the Essex Way to Coopersale. Wrapped up warmly and with the sun out it was a great feeling – which I appreciate is absolutely no consolation to anyone unable to venture out and therefore shivering at home. 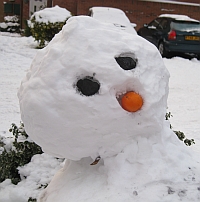 The most impressive snowman I found lurked in Brickfield Road, complete with clementine nose and eyes of coal. More worrying were the two doors elsewhere that I knocked on to tell the inhabitants they had left their keys in their outside locks. Perhaps they had been rushing inside to get out of the cold.

Thankfully, despite predictions, there has been very little snowfall over Friday and Saturday, so the busy roads have been clear of snow. It’s a different story on the side streets.

The slight change in weather meant the refuse and recycling crews were able to make some collections on Friday but there are still roads that the 20 tonne trucks can’t safely manouvre down and some big piles of sacks awaiting collection as a result. Here’s hoping any snow we get today (Sunday) won’t settle.

It seems almost compulsory for anyone with a website to put on show their pictures of the snow, so here is my contribution. 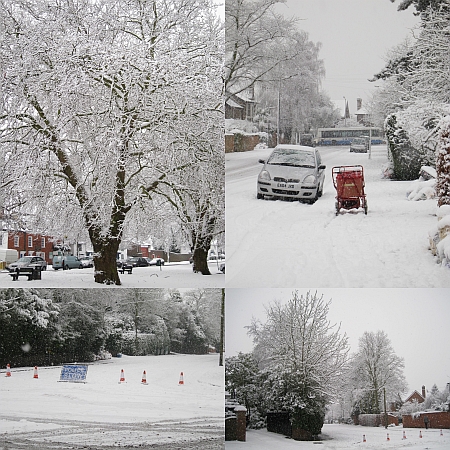 If you look carefully at the top right hand photograph (Hartland Road) it shows the post and the buses operating successfully, so well done to them.

It’s a pity the police only got round to closing Kendal Avenue (bottom photos) after several utterly predictable bumps and near misses. We live in hope that one day the county council will add the road to its gritting rota, given that there are always problems on this steep hill, but at the moment it isn’t treated as a priority route despite being used as an access to Epping Station. It’s something Janet Whitehouse has raised with both the police and Highways and will continue to do so.

From Monday 18 January the SM19 service from Epping Station to Harlow via Thornwood will also run on Saturdays along a route which has been extended to Ongar. [Information from Essex County Council’s Bus Passenger News.]

You can find out more about local bus services here and at Traveline (tel: 0871 200 2233). I’ve also found this independent website useful for Epping to Harlow journeys.

There has been some local concern about the withdrawal of the H1 bus service from 19 December. County councillor Janet Whitehouse and others raised concerns about what bus services would be available over the Christmas period before the launch of the revised Service 55 on 4 January.

From 19 December 2009, Essex County Council will fund a Saturday service operating to the current H1 Saturday route and timetable. This service will be numbered Service H1 and will be operated by Regal Busways.

Between 21 – 24 December and 29 – 31 December Essex County Council will fund a temporary replacement service on Service 55 operated by Travel With Hunny (for a timetable leaflet contact the Essex Traffic Control Centre on 0845 6000 110). Please note that this service will operate to a different route in Loughton to the current service H1. Contact Travel With Hunny on 01708 732604 for full details.

From 4 January 2010 Service 55 will be operated commercially Mondays to Fridays by Travel with Hunny to a revised route and timetable serving Loughton.

Timetable details should be available via this link in due course. This newspaper article gives some background details.

I popped in yesterday to the Highways Agency’s exhibition about major roadworks about to start at Bell Common tunnel. Drivers who travelled through the Holmesdale Tunnel near Enfield a couple of years ago will be familiar with the sort of work that is planned: upgrading the ventilation system and replacing electrics and emergency equipment.

Unlike at Holmesdale, the Agency has committed to keeping three lanes of traffic open in each direction during the day. As an average of 120,000 drivers travel through the tunnel every 24 hours this is pretty important if massive delays are to be avoided. The estimated completion date is March 2011 and the agency reckons that delays at peak times should be no more than 15 minutes. We will see. As a local councillor the main concerns I had were about the amount of traffic which might be tempted to divert from the M25 onto local roads if the delays are lengthy, the visual impact of the new ventilation units when the scheme is complete and the effect on local residents (noise, air pollution etc.) during construction. The answers were broadly re-assuring – an environmental assessment has been carried out, the contractors have liaised with Epping Forest District Council’s environmental health officers and there will be new planting when the works are complete – but I’ll be checking a couple of things with council officers.

You can find more information at the Highways Agency project page here. I’ve also found a presentation [PDF] explaining details of the work.  Costain (the contractor) has set up a 24-hour community helpline for anyone with queries or concern:

I’m looking forward to seeing new bus shelters on Epping High Street. My town council colleague, Rob Macrae, has been pressing this issue as the current shelters outside St John’s Church and on the other side of the road are well past their sell-by date.

I’m told the new shelters will be much more in keeping with Epping. Hopefully installation will be some time during Autumn.