The Epping Society has organised a public meeting about the Epping Forest draft local plan which will take place on Monday 14 November at 7.30pm in Epping Hall, St John’s Road. Going on past experience the meeting could be quite busy so if you plan to attend it’s worth turning up in good time.

There is free parking in Bakers Lane car park opposite Epping Hall. 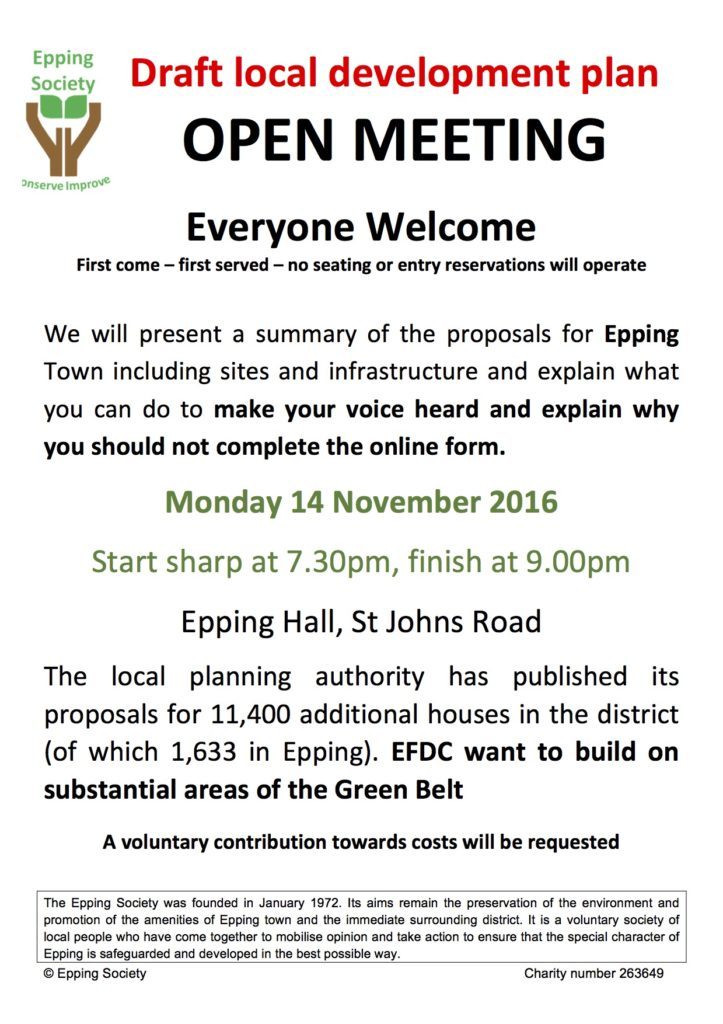 This is exhibition week for the Epping Forest Local Plan. I gather the events that have happened already have been well attended. Epping’s turn is tomorrow at Epping Hall in St John’s Road from 3.30pm until 8pm. Parking is free in Bakers Lane car park opposite after 6pm.

Please come along to discuss the plan with council staff and ask questions. A number of councillors will also be there. 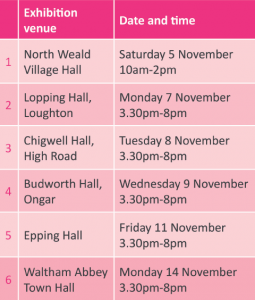 You can read the Epping Forest draft local plan and literally thousands of pages of background information on the local plan website at http://eppingforest.consultationonline.co.uk/technical-information/. 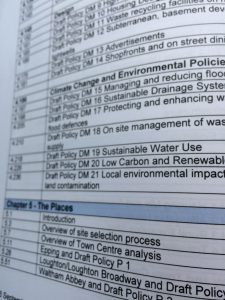 May is Scams Awareness Month (organised by the Citizens Advice Bureau and the Trading Standards Institute.

These are just a few of the scams that the Essex County Council Trading Standards team has come across this month:

Scams are schemes to con people out of their money. They can be carried out by post, phone, email, online or sometimes via a knock on the door.  Scams take different forms such as fake lotteries, prize draws, bogus health cures, dodgy investment schemes, pyramid selling and phishing.

The best piece of advice is: “if it sounds too good to be true it probably is!”

You can check the Action Fraud alerts for common scams and frauds at www.actionfraud.police.uk/news.

It is likely to be a scam if:

What should I do with something I think is a scam?

What can I do to tackle scams?

How can I protect myself? 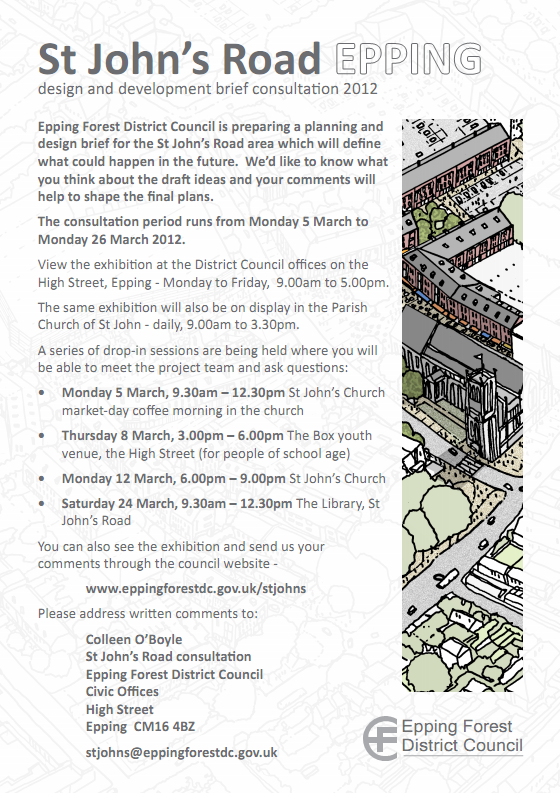 Every Friday Epping Forest District Council publishes a list of recently submitted planning applications. The first thing I do is to look for anything that affects Epping before I scan the file for any significant applications elsewhere.

The most interesting local application this week is yet another attempt to develop the old Wintry Wood service station site on the Thornwood Road. There can be no doubt that in principle the site is suitable for redevelopment. It is previously developed land which is not in the Green Belt. However earlier attempts to build flats have not found favour with the local planning committee (on which I sit) for various reasons – including the bulk of earlier designs and the impact on neighbours.

The revised application proposes twelve flats (10 x two-bedrooms, 2 x 3-bedrooms) and the plans can be viewed on the district council’s website.

The site is not as straightforward to develop as might initially be supposed because of its relationship to existing houses along Thornwood Road, its proximity to the Lower Forest and the fact it is pretty much the first bit of Epping that people see if they are entering the town from the north (from Harlow / Thornwood). This makes it a sensitive so-called ‘gateway’ site.

As a member of the planning committee I won’t take a final view until I have taken account of any representations submitted by neighbours, Epping Town Council and other interested people and considered the report which council officers will prepare. But I would be interested to know what other people think.

There is a much smaller scale application which also caught my eye. An applicant in St John’s Road is seeking to install cast iron railings apparently very similar to the original walls in place of the existing mixture of boundary treatments. Again, I will need to reserve final judgement until I see any representations but at first sight it looks a positive move.

It’s especially interesting to see someone going against the common trend to demolish boundaries and pave over front gardens (in order to provide off-street parking). 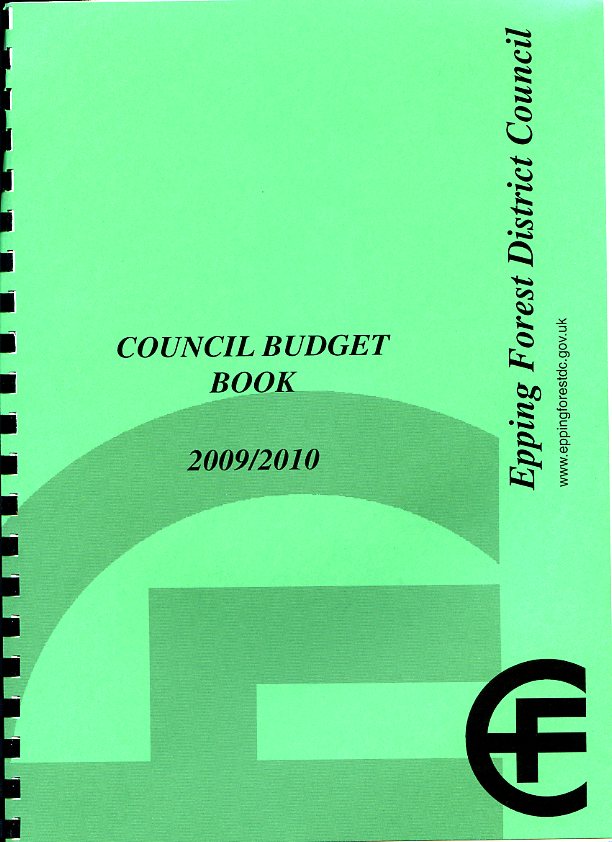 cil set its budget last night (meeting papers available here). When I last wrote about the budget I said I hoped there would be an opportunity to reduce the planned council tax increase below the 1.5 per cent rise discussed at the cabinet sub-committee meeting.

Thanks to a bit of work by council officers, which was shared with all groups, we were able to confirm that a council freeze this year would not put the council’s medium term financial strategy or its financial stability at risk. After a close look at the latest figures – especially by Ongar councillor Derek Jacobs and me – the Liberal Democrats were able to put forward a budget amendment incorporating a council tax freeze: i.e. a district council tax rise of 0%.

There is often an assumption in local government that council tax should always increase, but the Lib Dem group felt strongly that Epping Forest residents deserved a break from relentless council tax rises. Yesterday’s inflation figures highlighted how much household budgets are under pressure at the moment because of VAT and fuel increases. Thanks to the millions of pounds that the council has stashed away in its reserves, we were able to propose the freeze without cutting into services

Unfortunately the Conservatives (and the other groups) were determined to stick to their council tax increase so our council tax freeze was voted down. It may be some consolation to residents that the 1.5 increase agreed is still less than the 2.5 per cent increase proposed at the start of the budget process.