Because of the Christmas and New Year bank holidays, the council will collect rubbish and recycling later than usual over the next couple of weeks. The changes are:

Back to normal on Monday 12 January. You can find out more about the refuse and recycling service in Epping Forest at the recycling and waste section of the council’s website including details of standard collection dates and whether it’s a recycling (clear sack) or non-recyclable (grey bin) collection week and what you can recycle.

The hosepipe ban in our area came to an end on Monday. So if your garden needs watering (ha! ha!) life just got easier. This is the message I received from Veolia (what used to be Three Valleys Water) explaining the decision.

I am writing to inform you that Veolia Water Central is lifting its temporary use ban, with effect from today, Monday 9 July. This means that customers can use hosepipes from this date.

The ban was introduced on 5 April, following two consecutive autumn and winter periods of below average rainfall, which left much of the South East of England in drought conditions.

The temporary use ban has helped to reduce demand and conserve our water resources and we would like to thank our customers for their incredible support and we apologise for inconvenience caused by the ban.

The unprecedented rainfall since April has lead to a significant improvement in our water resources, which have now recovered sufficiently to allow us to lift the ban, without putting strain on the local environment.

Veolia Water Central takes most of its water from natural underground chalk reservoirs, called aquifers, which take longer to respond to rainfall, as the water has to permeate through soil and rocks, which has taken some weeks.

Although the exceptional levels of recent rainfall have resulted in an unusually high top up of groundwater for this time of year, the critical period for recharging our aquifers is between October and March, when less rainfall is lost to plant growth, evaporation and run off to rivers.

It must be stressed that groundwater levels still remain lower than normal, so we are asking our customers to continue to use water wisely. We will need prolonged and substantial rainfall, particularly during the next autumn and winter period, to restore our groundwater to normal levels. A third dry autumn and winter would make a hosepipe ban next year a possibility.

The ban, together with the significant rainfall since April, has resulted in a reduction in demand of about 7%. Veolia Water Central has also reduced leakage by over 20 million litres per day below our regulator agreed leakage reduction target for this year.

The message about groundwater levels remaining lower than usual is a reminder that we live (normally) in one of the driest regions in Britain and that future plans for building in our area must take account of our water resources.

As I walk or drive around Epping I regularly report broken or poorly maintained street signs to the district council and I am pleased to say that in most cases council staff respond fairly promptly. Sometimes they have even spotted the damage and ordered a replacement before the problem has been reported.

I was pleased to learn that signs in Springfield and Centre Avenue in Epping are to be replaced this week as both have been steadily deteriorating. The nameplate in Springfield is literally on its last leg, as one of the supporting metal posts has disappeared or been taken.

The design of the street signs used by the council has changed over the years. Personally I think the current design, with the black edging and wooden posts (see Tidy’s Lane example below), is more attractive than those used in the past. I hope the council sticks with it. 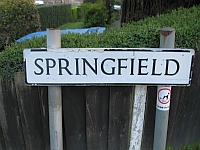 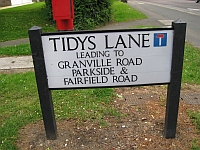 This picture was taken in March 2007 – and the railings in Epping High Street were well overdue for repair then! Since then I’ve often contacted the county council about their failure to repair or replace them. At different times the reasons for delay have included the need to place a special order, the difficulty of sourcing matching stock, the need to obtain funding from Chelmsford (where the county council is based) and staff shortages.

So I was pleased today to receive an email confirming that repair works are due to start in two week’s time.  I won’t quite believe it until I see workers are on site (delays caused by more snow anyone?) but let’s hope by the end of the month residents no longer have to put up with the red plastic ‘temporary’ barriers spoiling what is mostly a very attractive street.

Unsurprisingly, the recent poor weather has hit local refuse collections. (After all almost every other service seems to have been affected.) One of the more unexpected consequences of the freezing temperatures has apparently been that blue boxes containing glass recycling have frozen to the pavement.

The clear sack collections should have gone back to normal today (Thursday) but the green waste collection service has been suspended until Monday 16 February. I suppose there can’t be much gardening going on at the moment anyway.

The council has issued the following revised timetable for wheelie bin collections:

Unless things change again when the snow predicted for Friday arrives.

The district council has been casting about for ways of generating cash. As a result it has submitted a planning application (to itself!) requesting permission to erect advertising hoardings at 15 locations on roundabouts across the district.

I will be interested to see how this is received. When the same idea was put forward several years ago it was withdrawn quite swiftly because various people were unhappy at the prospect of advertising and further ‘clutter’ in Epping Forest.This has not deterred the Conservatives from including the Wake Arms and Robin Hood roundabouts in the current application, as well as other roundabouts in less sensitive locations. As far as I can see from the information on the district council website, the City of London (which is responsible for Epping Forest) hasn’t been asked for its views.

The council hopes to erect up to three hoardings per roundabout (5 feet by about 2½ feet) mounted on poles. You can find out more using the council’s new online planning service: the application number is EPF/1814/2008.

Janet Whitehouse and I are trying to persuade Metronet to reduce the impact of the works they plan to do along the Central Line embankment. Many residents are understandably concerned about plans to remove trees and other vegetation from the railway line between Brook Road and Epping Station. It’s clear that the planned works will have a devastating effect on the outlook over the railway line, particularly from homes in Sunnyside Road and Crossing Road.

Along with town councillor Olive Dunseath we attended a meeting with residents and representatives of Metronet at Epping Hall in August. Metronet explained that London Underground needs to improve the stability of the embankments but we are concerned the construction works will be disruptive and the removal of the trees will spoil many residents’ outlook

Since the meeting we have been in regular contact with Metronet and met a represetative from Metronet and Murphys on site on 29 August. We are working with the district council’s tree officer, who has been particularly helpful and has suggested how Murphys could change working methods to save some of the trees near Brook Road. We are also pushing for a proper replanting scheme. We need them to do much better than they managed on the Sunnyside Road side of the embankment last time works took place.

Murphys were on site earlier this week doing some preparatory work.