So, Eleanor Laing survived her meeting with Epping Forest Conservative activists last night. And, to be fair, she won a thumping victory over the local Tory malcontents. 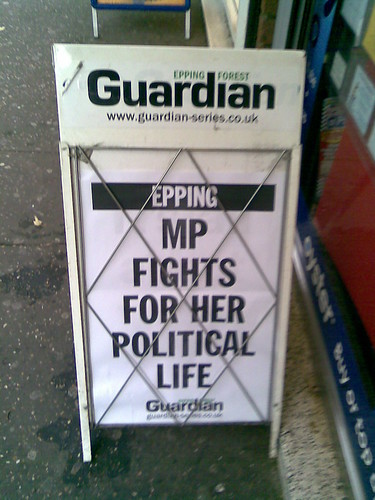 It suggests to me that many Conservatives still haven’t grasped the scale of the expenses scandal or the desire that many local residents have for a fresh start.

I can’t help wondering if the outcome would have been different if, instead of a closed meeting with the party faithful, Mrs Laing had organised an open public meeting for all her constituents, like those that attended by some of her colleagues. 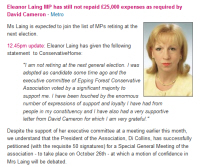 I knew there was unhappiness among some local Conservative members and councillors but had not realised until today’s reports that Mrs Laing faces an organised attempt to deselect her. Conservative website ConservativeHome suggests that the Leader of the District Council, Di Collins, is behind the plot. If so, it will not be the first time she has tried to get rid of someone. Cllr Collins has form in this area. She fell out with Eleanor Laing’s predecessor, Steven Norris, to such an extent that along with colleagues she tried to deselect him as Epping Forest’s MP. They followed this up by trying to sabotage Mr Norris’s attempt to stand as the Conservative candidate to be Mayor of London with this letter to the Conservative Party Chairman.

One of the worst aspects of the affair is that the decision about Mrs Laing’s future rests not with her 75,000 constituents, but with a few hundred members of the Epping Forest Conservative Association (or the even smaller number who actually turn up to the deselection meeting). It’s another good reason to support Nick Clegg’s Take Back Power campaign, which would give voters the right to recall MPs who had lost the trust of their constituents. Sign up here and read more here.

Like most Epping Forest residents I don’t have a £1m second home (or first home!) so I have never had to deal with a possible capital gains tax bill of £180,000. When the Daily Telegraph first revealed how our MP told the parliamentary authorities that her second home was in London but told the tax authorities that her second home was in Theydon Bois I was prepared to wait for a full explanation. But all we have had instead is a legalistic statement which avoids the main issue.

I suggested on Saturday that Mrs Laing would be asked to pay the £180,000. David Cameron certainly stepped up the pressure over the weekend when he said in a response to a question about Eleanor Laing on The Politics Show:

He also implied she may not have long left on the Conservative front bench. As Shadow Justice Minister she can’t credibly speak on law and order issues if she is suspected of manipulating the rules.

Along with Ann Haigh and these people I don’t think she can credibly continue as our MP either. Those that make the rules should be scrupulous about how they obey them.

I was startled from my sleep this morning to hear the BBC reporting on Epping Forest Conservative MP Eleanor Laing’s second home. Mrs Laing is the latest target of the Daily Telegraph, whose main interest seems to be the profit she made when selling a flat in London which was part funded by her MP’s allowances, and how the income was treated for capital gains tax purpose.

It turns out that the same London flat can be a “primary residence” for tax purposes but a “second home” for the purposes of the Parliamentary Fees Office – which is confusing to say the least.

Mrs Laing points out that she took legal advice which confirmed that no capital gain tax was due and that she has broken no rules. This is not in dispute, but what many of us find troubling is that the Parliamentary rules have historically been so weak that some other MPs have apparently been able to exploit them for personal gain.

It is therefore unfortunate that when Mrs Laing had the opportunity to help clean up the system last July she was one of 21 Conservative MPs (and 146 Labour MPs) who voted against toughening up the expenses rule. The following week my Lib Dem colleague Ann Haigh expressed her disappointment in the Epping Forest Guardian:

“The vast majority of MPs are not corrupt. But so long as they resist having their expenses and allowances subject to robust, external audit, the public can be forgiven for wondering what they have got to hide…I am sure many residents of Epping Forest will be deeply disappointed that Eleanor Laing voted against allowing all MPs’ allowances to be externally audited.”