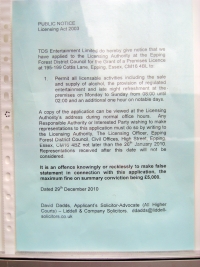 Eagle eyed pedestrians using Cottis Lane will have spotted a small notice outside Club 195. It advertises the fact that the club is applying for a new licence and that ‘Interested Parties’ can comment on the application by writing to the district council. (Click on the photo to read the full text.)

The district council revoked Club 195’s licence in October because of concerns about crime and disorder. The closure seems to have led to a reduction in late night noise, litter and disorder in the middle of Epping and has been generally welcomed by most (but not all) residents I have spoken to.

The new application is for:

the provision of regulated entertainment and late night refreshment at the premises on Monday to Saturday from 8 am until 2 am and an additional one hour on notable days.

I assume ‘notable days’ to mean special occasions such as New Years Eve. The previous licence allowed the club to open seven days a week from 11 am until 4 am. The main differences are therefore:

END_OF_DOCUMENT_TOKEN_TO_BE_REPLACED

The district council’s Licensing sub-Committee will discuss Club 195 at its meeting tomorrow (starting at 10am). You can read the agenda (including all the representations which people have been willing to make public) on the district council website here. Be warned – some of the files are very large!

It looks likely that the actual discussion will take place in private.

UPDATE: According to the local paper the sub-Committee revoked the club’s licence. See here for the story, which includes a short explanation from the sub-committee chairman. It was evidently a marathon meeting. I believe the club has the right to appeal to a magistrates’ court but this is something I need to check.

I’ve spoken to a member of the Licensing Committee who has told me that after a very long meeting and hearing evidence from both sides the committee today upheld the original decision to suspend Club 195’s licence. So the club will remain closed at least until a full hearing later this month.

As I mentioned below, local residents are entitled to submit their views to the committee but should do so by 13 October (next Tuesday).

Janet Whitehouse and I have been contacted by residents concerned about anti-social behaviour and violence outside Club 195 in Cottis Lane, Epping, especially following the shocking incident on Saturday 26 September which has been extensively covered by the local press.

Last Wednesday the district council responded to a request from the police and temporarily suspended the licence of Club 195. This temporary suspension was due to be reviewed yesterday (Monday 5 October) but the hearing has been postponed until Wednesday. This is not a full review but will simply decide whether the temporary suspension should continue pending a full hearing. The agenda can be accessed here.

The full hearing is expected to take place during the week beginning 26 October, and councillors on the Licensing Committee will consider representations from Club 195, from the police and other relevant organisations.  Local residents can also submit comments if they respond before Tuesday 13 October.

The law is quite strict about the issues that the Licensing Committee can take into account. These are:

so it is best to concentrate on these issues if you submit a representation. Recent experience suggests to me that points (i), (ii) and (iii) ae all very relevant. Submissions should be sent to: Mrs Kim Tuckey, Licensing Section, Epping Forest DC, Civic Offices, Epping, CM16 4BZ or licensing@eppingforestdc.gov.uk. Please also send me a copy at jon@jonwhitehouse.org.uk.

You can obtain a full copy of the council’s licensing policy from here [PDF].

The incident outside Club 195 was shocking, and there have been far too many problems late at night in that area. According to the police Club 195 has been directly associated with at least forty seven incidents over the last twelve months including six incidents of Grievous Bodily Harm, ten incidents of Actual Bodily Harm, seven other disturbances, seven thefts and six common assaults.

This is not what we expect in Epping (or should tolerate anywhere else either). I believe these problems can be dealt with if the council and police take the right action